“First of all, do you love it? Are you sure? Because if you don’t, [it can be] hard and discouraging. [But] it’s not hard to keep doing things you love.”

My road in life took a while to figure out.
The daughter of software engineers, tech has always been in her orbit, but she wasn’t very excited about it as a child.
Began gravitating towards programming in high school, but didn’t study it because it was intimidating; with no women in sight, it felt like an exclusive club.
It wasn't until she started taking math and CS classes in college—and actually got to actually start problem-solving—that she realized her passion.
As technology evolved—and the concept of hacking along with it—one question began to drive her: what’s keeping people’s data safe?
Called to solve this question, she developed threat-modelling: a process of protecting data that became part of Microsoft’s best practices.
Keeping data out of the wrong hands would carry her into a stint at Apple, where she ensured not even Apple could access people’s data.
Her greatest triumph? Giving users control of their data. With personal lives increasingly stored online, she wants users—not 3rd parties—to have the reigns.
Admits tech has hurdles; it can be exclusionary of minorities and women. It’s also just hard work—but it’s less hard when you love it.
Keep following my journey

I am a co-author of Threat Modeling, a standard manual on application security.

I work to build technologies that keep malware off of your network, computer, or phone. At Fastly, I oversee our expanding security offerings through its global edge infrastructure platform. I spend a lot of time working with different teams to build security applications that will keep our users data safe.

Don't focus so much on getting certifications in a bunch of different things. Work on developing your GitHub repository and working on independent projects that will demonstrate your knowledge and skills. Read everything and always be open to learning something new. Stay as up to date on new areas of the industry as you can.

Ask yourself, do I love this? If you don't, you should probably think of something else to do. Cybersecurity is really hard and it can sometimes be discouraging. The only time people talk about security is when it fails, so there are not a lot of kuddos in this job. You have to really love it.

In high school, I felt like programming and computer science was an exclusive club that I wasn't invited to because I was a woman of color. I delayed studying computer science because of this. It's a hard thing to overcome, but I love doing it, so I pushed through that. It's exciting to work on things you are passionate about no matter the challenges. 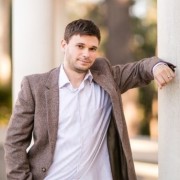