“I've never understood the American psyche of when you're eighteen years old, you have to decide what you're going to do for the rest of your life.”

My road in life has been direct.
Never thought he'd be able to make a "career" out of punk; says he doesn't have a living but he has a life.
Says money is not a driving factor for him, and he's never understood the American idea of "you need to find a career path when you're 18."
Says his dad is still waiting for him to "outgrow his punk phase," kind of wishes he'd get a "real job."
Responds to that by saying he might not be making the most money, but he's working 60 hours a week doing something he loves-that's truly a real job.
Started writing simply because he liked it, and he figured that eventually the money would work itself out.
Sees his work as important because he's giving coverage and exposure to bands that usually have no one writing about them.
When he looks at friends from his college who work 40 hours a week to save for their one vacation a year, he doesn't get it.
He, on the other hand, is constantly touring the U.S. and Europe with bands that he loves-thinks he truly has the best job.
Keep following my journey

I'm the editor and art director of a non-profit zine for punk culture. 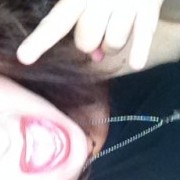