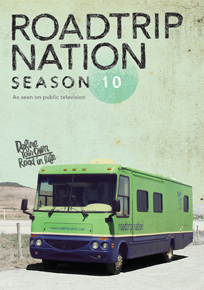 Explorers of centuries past ditched their familiar lands to embark on whirlwind journeys in search of themselves and the unknown. The Roadtrippers of Season 10 have decided to do the same.

Leaving behind their comfort zones and hopping aboard Roadtrip Nation's Green RV, the three 20-somethings travel the country, booking interviews with influential leaders in STEM (science, technology, engineering, and math) to learn the steps they took to get where they are today.

Conversation after conversation generates powerful epiphanies as the Roadtrippers hear how physicists, video game designers, and food scientists all found deep purpose doing what they love. In the end, it’s clear that there are endless ways to find fulfillment in life—if only you have the bravery to follow your heart and define your own road.