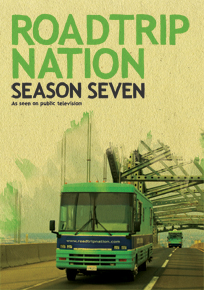 Traveling in large Green RVs, teams Tabula Rasa and Poor, Lazy, Overachievers of Roadtrip Nation's seventh season embark on their journeys across America from Southern California to the East Coast, hoping to learn more about themselves and their future paths. The teams of college students and college grads, each from different backgrounds and faced with different pressures, have a deep desire to figure out their Road in life. While Tina, Vanessa, and Calvin of team Tabula Rasa are strangers brought together by their drive for self-discovery, team Poor, Lazy, Overachievers–Aaron, Liz, and Autumn–are friends who grew up in the same small town and want to get out of what they call the velvet coffin of Stevensville, Mont. Throughout 10 episodes, the teams interview more than 24 Leaders about the passions that drove them, the fears that they faced, and the steps that they took to define their own roads in life.